#WeTheStudentsDoNotConsent: Mobilizing students in the fight for comprehensive sex-ed 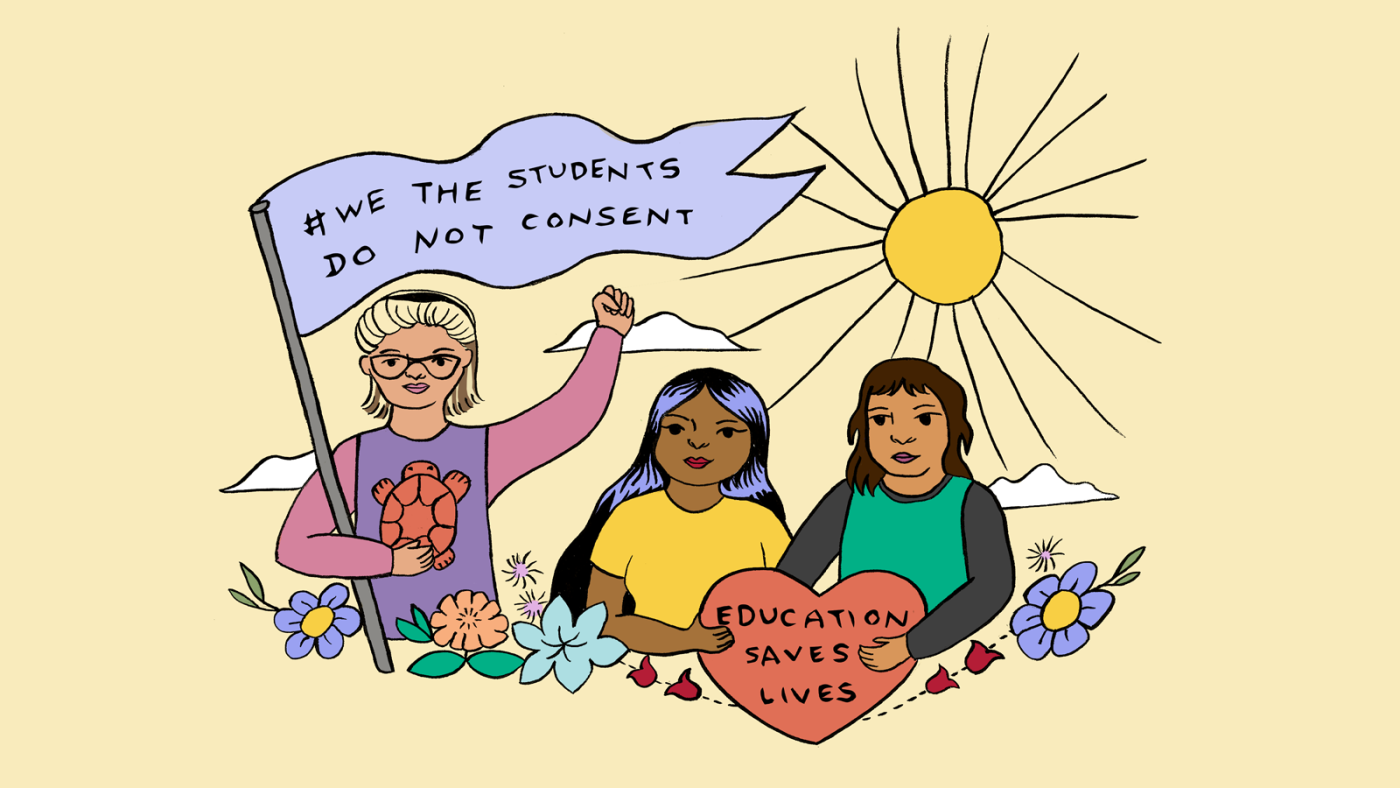 In 2018, high school students across Ontario walked out of their classrooms in protest of proposed rollbacks to the province’s sex-ed curriculum. A small and vocal group quickly ballooned to thousands, and the issue made news around the country. Madyson Arscott created the hashtag #WeTheStudentsDoNotConsent to rally students across social media, which was instrumental in building this movement. The simple statement became a symbol for the fight for inclusive and comprehensive sex-ed around the country. Here, Madyson tells us what good sex-ed means to them and why it was important to speak up.

In 2018, Ontario’s government under premier Doug Ford decided to scrap the most recent version of the sex-ed curriculum. They planned to replace it with the curriculum from 1998, in part due to myths that the newer curriculum was too “scandalous” or would “corrupt” children.

Among other omissions, the 1998 curriculum didn't include anything about cyber-bullying or queer relationships, which was pretty outdated for 2018. People around me were communicating online and exploring their identities. We needed sex-ed that was inclusive and updated to reflect what it meant to be a young person or any person at the time.

The importance of comprehensive sex-ed

When I found out about the proposed changes to the sex-ed curriculum, I felt pretty terrible. At the time, I was exploring my gender identity and sexuality, and the sex-ed curriculum was already pretty basic. We dedicated about two weeks to it, and despite the previous provincial government’s attempt to modernize the curriculum in 2015, the tone was still very much “stay abstinent or you'll get pregnant and die.” So, going back to the curriculum from 1998, which was before the graduating class was even alive, was sure to put people in danger.

Sex-ed isn't just about sex, it's about teaching young people how to navigate the world.

When young people aren't learning in the classroom, they're learning from other sources. People who were opposed to the updated version of the curriculum and felt it was teaching youth “too much” failed to realize that if students aren’t being taught in a safe, healthy, positive environment, they might be getting information elsewhere that might not be safe, accurate, or affirming.

Curriculums that represent everyone and ensure everyone feels included also help keep students engaged. Nobody wants to participate in a discussion that doesn't include and empower them. This is true not only of sex-ed but of history and social studies, which are often taught in a way that isn't always accurate or comprehensive, consequently passing on biased or distorted ideas to an entire generation.

Many people asked me why I felt protesting the proposed changes to the sex-ed curriculum was important, especially because I was just about to graduate. The people who came before us fought hard for our rights, and we should do the same. For me, this is true both in the sense of being a queer person and an Indigenous person. If nobody took action, other kids would go through the same thing I did in the public school system. I didn't think the movement would get as far as it did, but I knew I had to do something.

Another major flaw in the 1998 curriculum was that it didn't once mention consent, which is an incredibly important topic—talking to my friends, to other young people, consent comes up all the time. Sex-ed isn't just about sex, it's about teaching young people how to navigate the world.

When I was trying to think of ways to take action, I landed on coming up with a hashtag. A hashtag made sense to me because social media is such a powerful tool—most people are on there and everyone can have a platform, no matter how big or small. By sharing something on social media, your ten followers are ten people that now know something they might not have before. It helps people feel that they're actually doing something.

My mom told me that I needed to keep it simple and ensure the hashtag could fit into a sentence, which is how I came up with #WeTheStudentsDoNotConsent. It used powerful language and communicated the message that students were angry, that we didn't want this change, and that they were taking away the crumbs we had.

Using a hashtag or posting on social media may seem like a small action, and I think many people feel hopeless as just one person, but you see these entire movements being organized through social media now, and I think that’s encouraging people to feel like it’s possible to have more of an impact as individuals.

The importance of perseverance and patience

After the province-wide walkouts and protests, the Ontario government did finally walk back on their plans to completely roll back the sex-ed curriculum, and I like to think that #WeTheStudentsDoNotConsent had a role to play.

For other young people trying to make changes in their schools or communities, I’d tell you to be sure of your message and what you want to say. What are the changes you want to see? Make sure you have all of your information. As a young person with opinions and things to say, you may be met with resistance and dismissal from adults.

My mom gave me a piece of advice that's stuck to me to this day. I remember emailing politicians to try to find solutions to homelessness at a time when I was hospitalized, and my mom said “Madyson, before you can save the world, you have to save yourself.” Problems are still going to exist tomorrow and the next day. It can be exhausting, but it's okay to take breaks and focus on yourself. At the end of the day, people might not want to listen to you, but with perseverance and patience, your voice can still be heard.

Join the conversation: Download our SRH Week social media toolkit and help spread the word about the importance of advocacy in creating a world where everyone can be healthy and thrive!