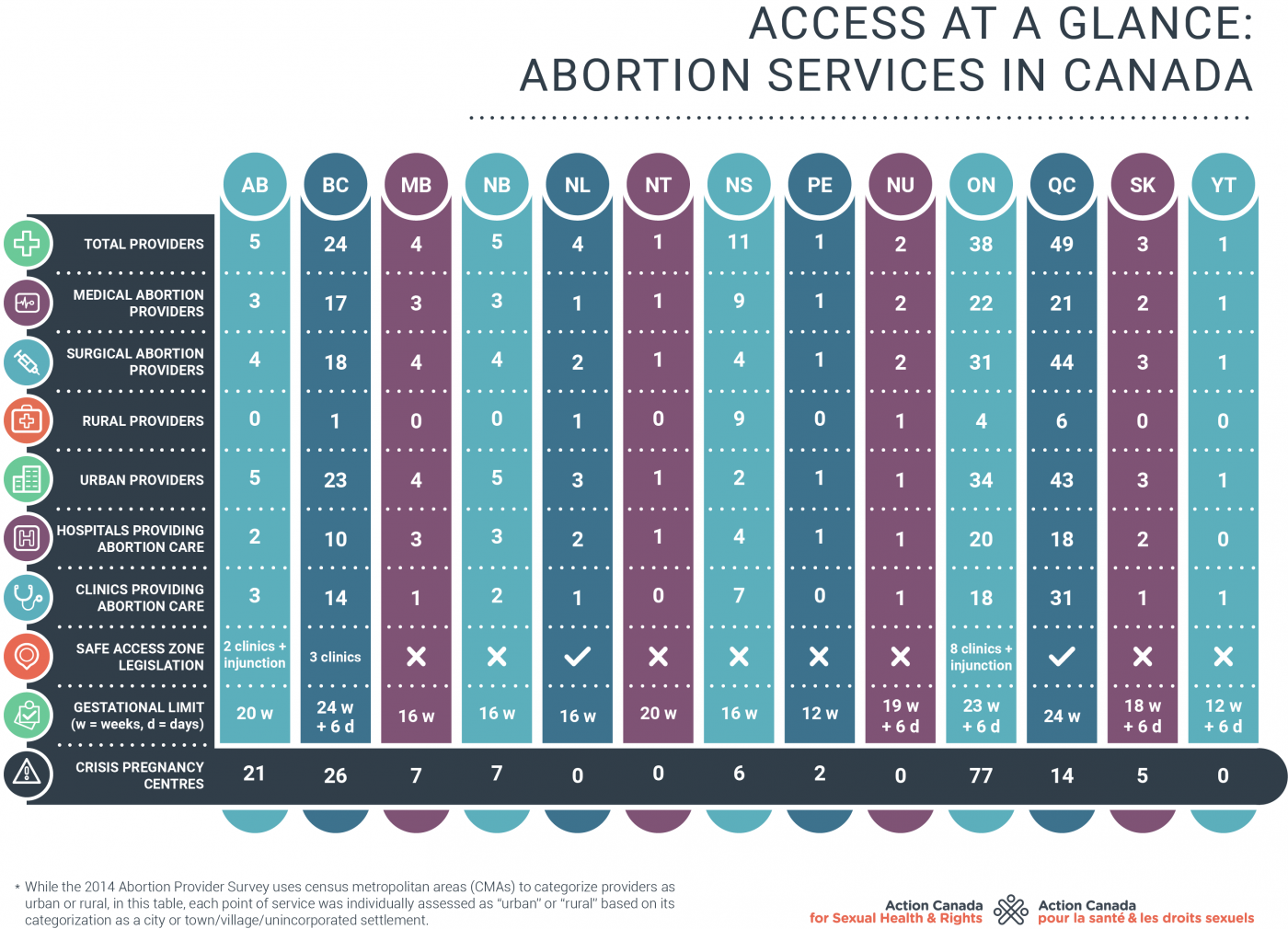 The difficulty accessing abortion in rural and remote areas

Abortion is a medically necessary health service; yet, people who live outside of Canada’s urban centers face barriers in accessing the time-sensitive service.

There are significant disparities between rural and urban access to abortion. In some provinces like Alberta, Saskatchewan, Manitoba, and Ontario, abortion providers are only in urban centers, despite 35-40% of the population living in rural or remote communities.

Through Action Canada’s toll-free Access Line, we speak to hundreds of people who have to travel out of their communities to access abortion and pay for travel expenses out of pocket (bus tickets, plane tickets, gas, hotel rooms, etc.). Traveling to another city for a procedure also means taking time off work, planning and paying for childcare, eldercare, and/or pet care, and buying food to bring on the trip. Many abortion providers require an escort, in which case, a family member or friend must also pay out-of-pocket to travel. Some people can’t afford to pay for those expenses and many have to delay their procedure to raise the funds. Delaying an abortion can mean exceeding the gestational limit in your province, which then means having to travel even further.

Access to health services shouldn’t depend on your postal code or income bracket! 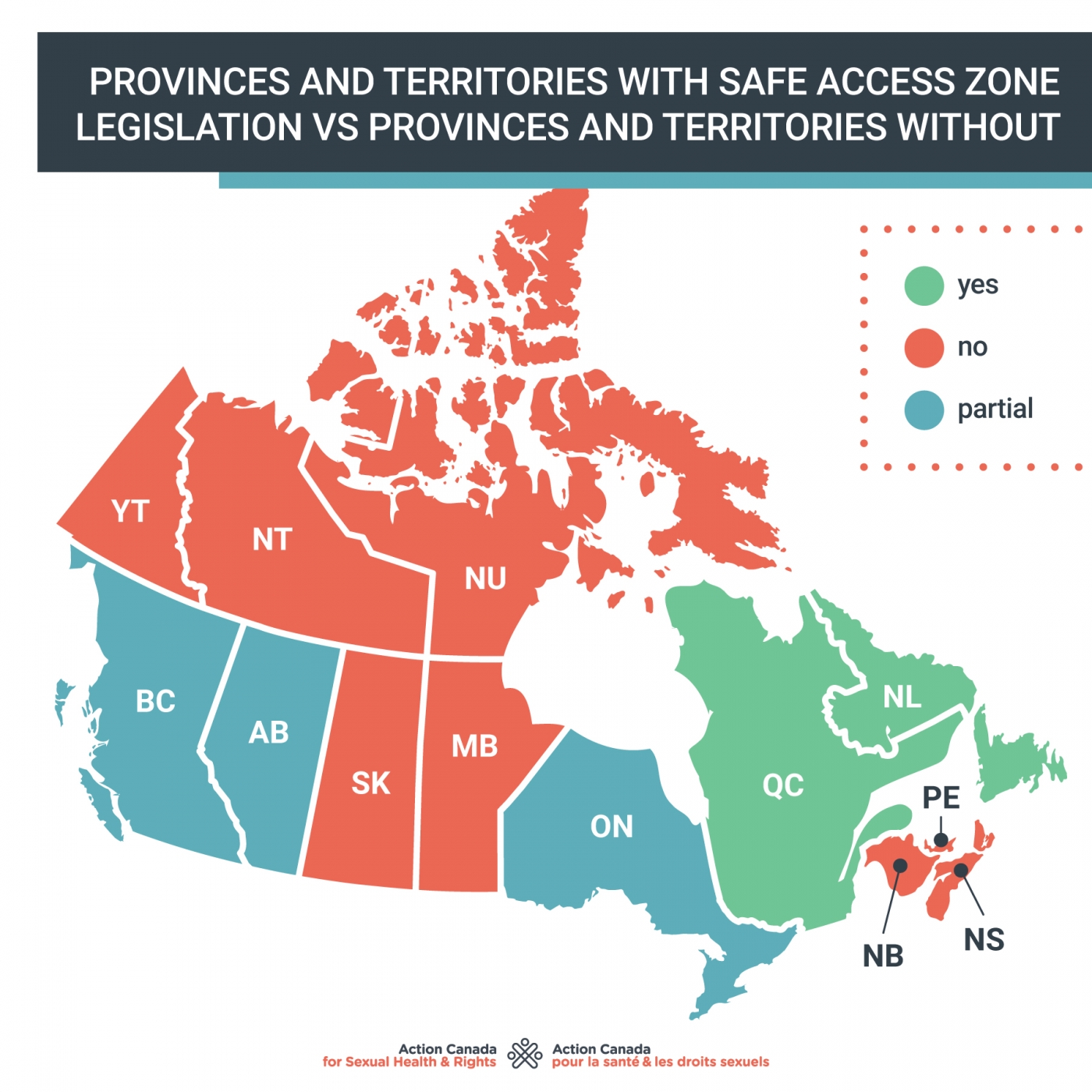 The Number of Provinces/Territories with Safe Access Zone Legislation

The need to increase the number of abortion providers

The above table notes the number of medical abortion providers located in standalone sexual health and/or abortion clinics. It is important to note that this number does not including the rapidly growing number of family doctors incorporating Mifegymiso into their practice. We recommend that those seeking medical abortion in their area contact their family physician first, if they have one. We urge all family physicians to incorporate Mifegymiso into their practice to ensure timely access to this essential service. (*Pour les résidents du Québec, les règles du Collège des Médecins du Québec imposent des restrictions sur cette pratique. Communiquez avec votre centre de santé local pour plus d'information).

The World Health Organization recommends that all physicians, nurses, and midwives be allowed to prescribe the abortion pill. The combination of the Mifepristone and Misoprostol pills (sold together in Canada under the brand Mifegymiso) is the World Health Organization gold standard for medical abortion. Mifegymiso was approved for usage in Canada in 2015 after the longest drug approval process in Canadian history. The pills, which have been used safely in over 60 countries for decades, have the potential to address historical gaps in abortion access in remote and rural areas.

In November 2017, Health Canada changed the language in their product monograph from “physicians only” to “health professional.” This change extends prescribing and dispensing to pharmacists, nurse practitioners, midwifery groups, etc.. The addition of midwife and nurse prescribers is especially important because it has the potential to significantly increase access to medical abortion. There are Almost 1,700 midwives and almost 6,000 Nurse Practitioners working in Canada. But increasing access to medical abortion requires these health care providers on the frontline (family physicians, nurse, and midwives) to offer medical abortion as an option to their patients. Primary health care providers need information, skills, and supports from their professional associations and regulatory bodies to be able to integrate medical abortion into their practice.

All governments and health care professional associations must actively work to promote the uptake of medical abortion!

While medical abortion care improves access to abortion, it is only available until 9 weeks of gestation, which doesn’t always leave enough time. Access to abortion needs to include surgical abortion and needs to expand beyond 24 weeks—Canadians wanting an abortion past 24 weeks currently have to travel to the US. Surgical abortion does require additional training and with a significant number of surgical providers aging into retirement, it is crucial that abortion be incorporated into medical school curricula across the country.

All medical school curricula should include a thorough training on abortion care! 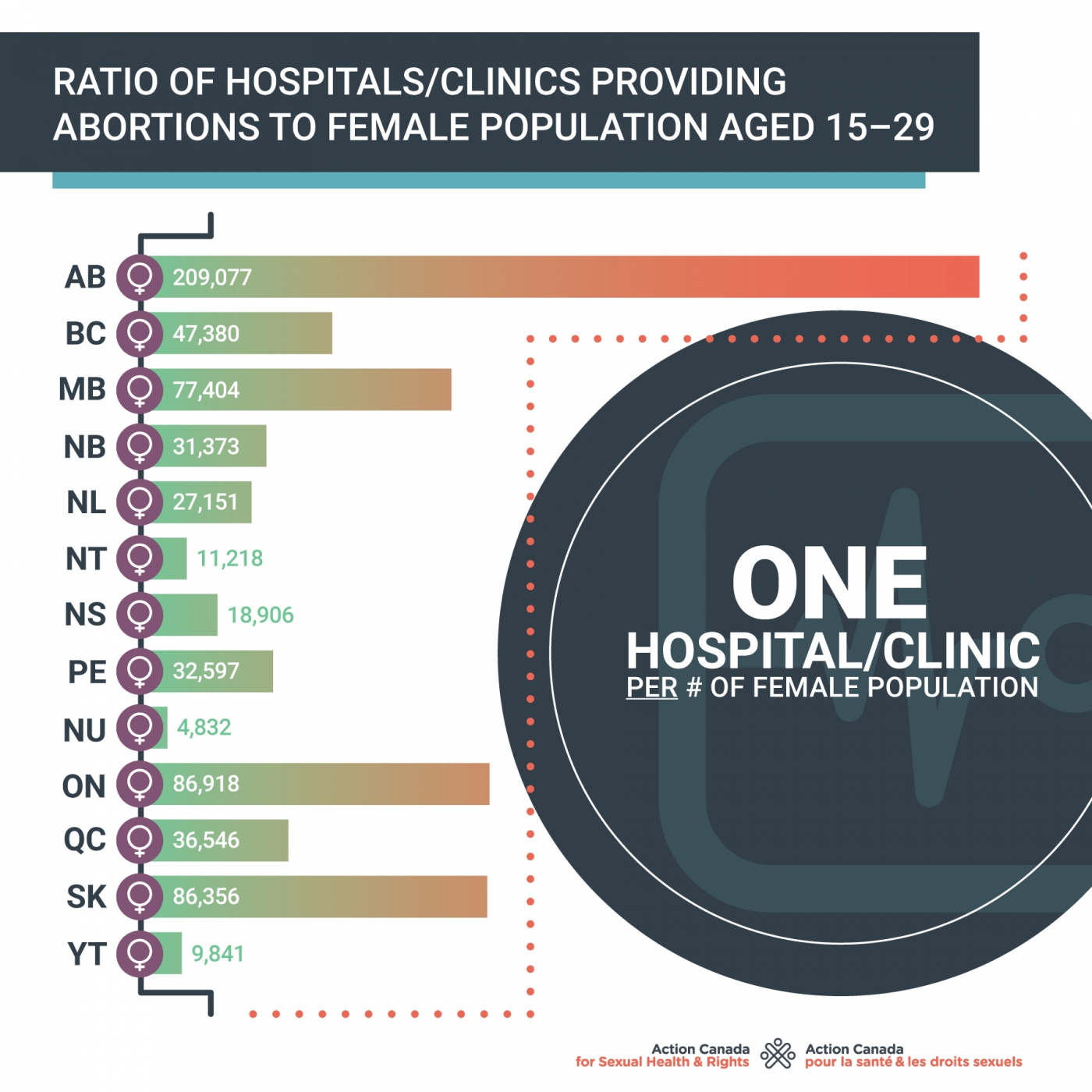 While close to 95% of all abortions performed in Canada are done in the first trimester (before 12 weeks gestation), some Canadians need access to services beyond 12 weeks. There are many reasons someone might want an abortion after 12 weeks, including a delay in scheduling an appointment, having to raise funds to travel, not knowing they were pregnant, health issues, facing a personal emergency, etc.

Depending on a person’s location, they may have to travel out of province or out of country to access abortion beyond 12 weeks. On Prince Edward Island, for example, abortion is only available until 12 weeks gestation. In Nova Scotia, until 16 weeks, and in New Brunswick, only until 14 weeks or 16 weeks (if you can pay for the procedure out-of-pocket). In Yukon and Nunavut, the gestational limit is 13 weeks.

All provinces and territories should ensure access to abortion beyond 20 weeks gestation. In the meantime, all provincial and territorial governments need to improve their out-of-country coverage and ensure all expenses are covered, prior to travel. Currently, many provinces and territories download the costs of travel and accommodation to individuals and charities like Action Canada. We’re here to support but governments have an obligation to provide cost-coverage for all health care needs.

Provincial and Territorial governments should fully cover the costs incurred when people cannot get the health services they need close to home!

Access to abortion varies across Canada. While some provinces and territories have enacted regulations and policies that facilitate abortion access, others have made it more difficult. Below is a snapshot into 2 provinces with very different approaches.

Unlike any other province or territory, New Brunswick illegally refuses to pay for abortion services outside of hospital settings. This means that abortions provided in clinics are not funded by the government. This is a human rights violation and contravenes the Canada Health Act, which requires that all medically necessary services be cost covered through provincial health insurance. For decades, people across New Brunswick and Canada have been advocating for the government to strike down the discriminatory regulation 84-20 from the Medical Services Payment Act. Successive governments continue to ignore this call and persist in maintaining an unfair, antiquated and illegal policy that seriously impacts abortion access in New Brunswick.

The Federal Government should uphold the Canada Health Act and intervene in New Brunswick to ensure fair and equal access to abortion services!

Abortion care is part of Quebec’s primary health care network thanks to years of advocacy dating back to the 1970s by feminist activists, progressive health care providers, and allies. Advocacy focused on the right to access abortion led to the establishment of abortion access points throughout the province of Quebec. Now each region in the province must have at least two access points and most regions meet or exceed that standard with access points in several hospitals, women’s health centers, and community health centres. Almost half of Canada’s surgical abortion locations are in Quebec. It is also one of three provinces where abortion is available up to 24 weeks of gestation and will soon expand access to abortions beyond 24 weeks.

All governments should take steps to ensure abortion care is integrated into primary health care networks!

Quebec also publishes accurate health information about abortions on the Quebec Ministry of Health Website, as well as a tool where people can enter their postal code and find out where their nearest provider is. The number of locations combined with accurate health information means people in Quebec benefit from easier and timelier access to abortion care. However, while Quebec has a universal cost coverage program in place for the abortion pill, the uptake of medical abortion in the province is slow because of restrictive regulations put in place by the College Des Médecins du Quebec.

All professional associations and regulators must avoid introducing additional restrictions to further control the prescribing and dispensing of Mifegymiso!

The issue of parental consent

Governments should not introduce legislation that compromises young people’s access to sexual and reproductive services, such as parental consent for abortion!

The issue of abortion referrals

Most abortion providers in Canada allow anyone to refer themselves for abortion services. Self-referral for abortion is a right and is necessary because abortion is a time-sensitive procedure and every person has the right to choose to have an abortion without anyone else’s approval or medical justification. Nevertheless, in some Canadian hospitals, regulations still exist that require patients be referred to an abortion provider by another doctor. This is a barrier to access. It forces a pregnant person to locate a doctor who will agree to refer them. Some physicians are anti-choice and may not agree to make a referral. Some remote and rural areas in Canada have very few doctors and timely access to one is difficult. In every case, doctor referrals create a delay for a time sensitive, medically necessary service.

All hospitals should have a self-referral policy for abortion services! 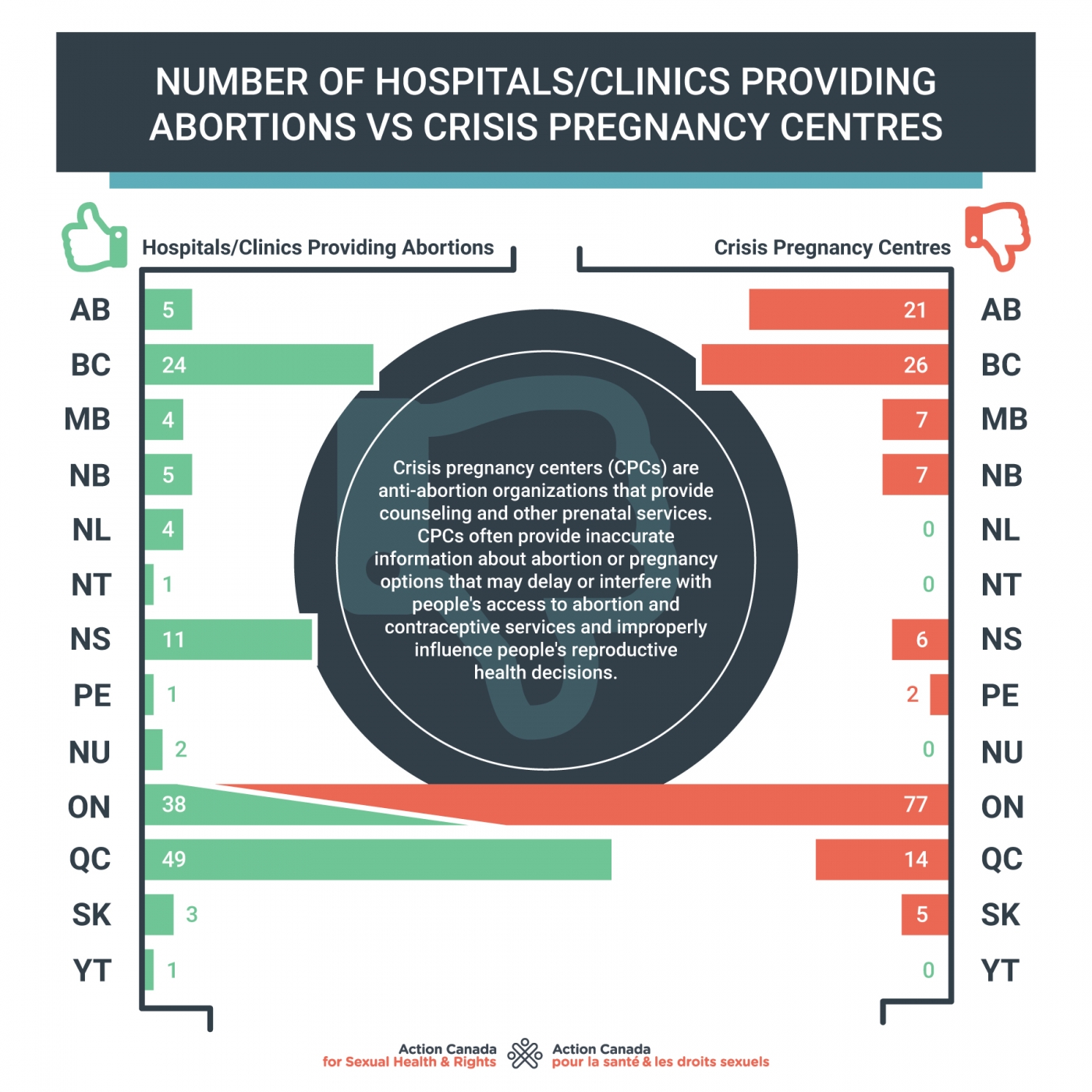 Crisis pregnancy centers (CPCs) are anti-abortion organizations that provide counseling and other prenatal services. CPCs often provide inaccurate information about abortion or pregnancy options that may delay or interfere with people's access to abortion and contraceptive services and improperly influence people's reproductive health decisions. In addition to pregnancy tests and counselling, some of these centers offer ultrasound services, which can blur the line with medical services. In Canada, there are more CPCs than abortion providers. In Alberta, for example, there are 5 abortion providers and 28 CPCs. In Ontario there are 77 CPCs. Many CPCs exist in smaller communities where there are no abortion providers and no judgement-free sexual health centres and are often the first search results for abortion information online.

The issue of conscientious objection

Sexual and reproductive health services are among the services that physicians are most frequently unwilling to provide on moral or religious grounds. The refusal by health care providers and sometimes health care institutions to treat or refer patients who need certain services because of conscientious objection is unethical and a violation of human rights. Governments and professional associations have a responsibility to ensure services are accessible, available, acceptable and of quality. Global best practice also dictates that health care providers are required to provide the service in emergency situations – regardless of their personal views.

People who are refused care by health care professionals because of personal beliefs may experience stigma and/or discrimination in despite an effective referral plan. For example, in communities with a limited number of health care providers generally, patients seeking certain services may not have access to a health care professional willing to provide the service needed and must therefore travel outside of their community to receive the care they need. This can be particularly difficult for young people or those with limited resources.

All governments and health care professional regulatory bodies must ensure timely access to all sexual and reproductive health services, including abortion. This includes having robust policies around conscientious objection and effective mechanisms of monitoring and accountability!

Barriers because of discrimination

Everyone has the equal right to the best quality health care, regardless of race, age, class, immigration status, gender expression, sexuality and ability. Nevertheless, there are multiple ways in which everyone’s right to seek abortion care are impacted by discrimination and bigotry, both systemic and as a result of individual prejudice on the part of service providers. Racism, xenophobia, classism, homophobia, transphobia, ableism, and ageism in Canada are all direct and intersecting barriers to accessing abortion.

It is much more difficult for a person who doesn’t speak English to access abortion services, despite the presence of a translator. Health care providers will often inform or not inform a person about their choice to have an abortion based on assumptions and prejudices about that person’s culture and background. Trans folks also experience discrimination at higher rates in reproductive health care settings. Providers may also lack the knowledge or training to provide trans-affirming abortion care and abortion services are typically housed within “women’s health care” departments.